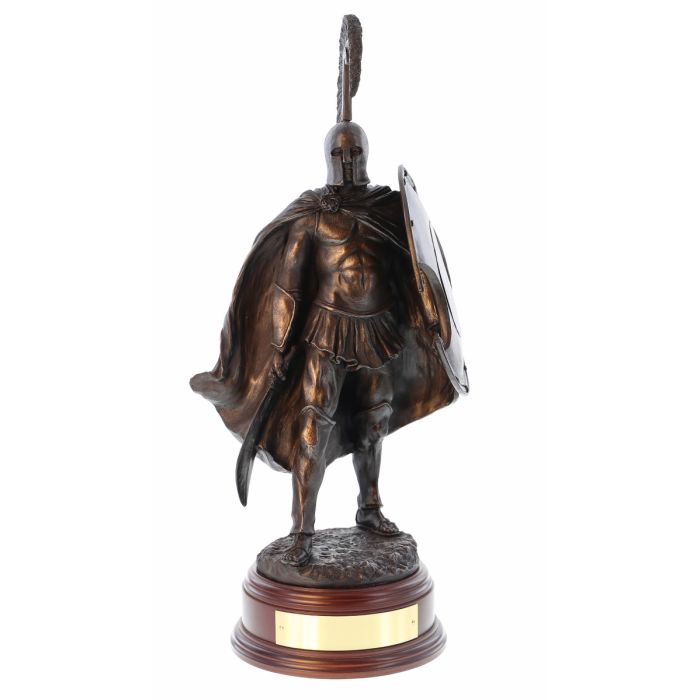 12" Scale Cold Cast Bronze Sculpture of a Thespian Hoplite Circa 480BC.

When the Persians arrived at Thermopylae in mid-August, they initially waited for three days for the Allies to disperse. Seeing they would not leave, Xerxes commenced the attack. However, the Greek position was ideally suited to hoplite warfare, the Persian contingents being forced to attack the phalanx head on. The Allies thus withstood two full days of battle and everything Xerxes could throw at them. However, at the end of the second day, they were betrayed by a local resident named Ephialtes who revealed a mountain path that led behind the Allied lines to Xerxes. Xerxes then sent his elite guards, the Immortals on a night march to outflank the Allied. When he was made aware of this manoeuvre, Leonidas dismissed the bulk of the Allied army, remaining to guard the rear with 300 Spartans, 700 Thespians and a few hundred others.

The Thespians, resolved as they were not to submit to Xerxes, faced the destruction of their city if the Persians took Boeotia. However, this alone does not explain the fact that they remained; the remainder of Thespia was successfully evacuated before the Persians arrived there. It seems that the Thespians volunteered to remain as a simple act of self-sacrifice, all the more amazing since their contingent represented every single hoplite the city could muster. This seems to have been a particularly Thespian trait on at least two other occasions in later history, a Thespian force would commit itself to a fight to the death.