12" Scale Cold Cast Bronze Sculpture of a Roman Legionary of the Tenth Legion at the Battle of the Sabis, fought in 57 BC near modern Saulzoir in Wallonia. 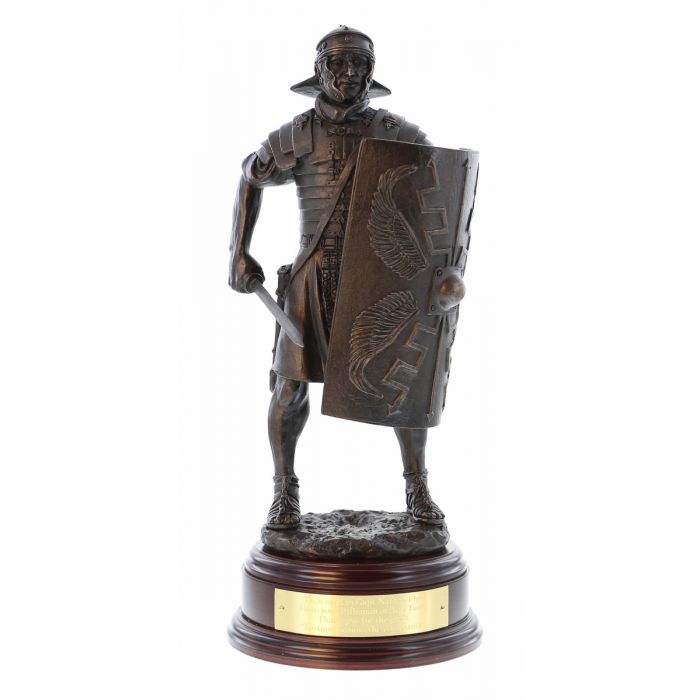 12" Scale Cold Cast Bronze Sculpture of a Roman Legionary of the Tenth Legion at the Battle of the Sabis, fought in 57 BC near modern Saulzoir in Wallonia.

When Gaius Julius Caesar arrived as Governor in the province of Baetica or Hispania Ulterior (Farther Spain), as it was in 61 BC, he immediately decided to subdue the west and northwest areas (modern day Portugal). He already had two legions based in the province, the 8th and 9th Legions, which had been enlisted by Gaius Pompeius Magnus (Pompey the Great) in 65 BC. Caesar needed a third legion for his planned campaign and so he immediately enlisted a new legion, the 10th Legion. Enlisted in March, the legion took as its emblem the bull. The Tenth played a crucial part in the Gallic Wars, fighting under Caesar in virtually every battle.

At the beginning of the Gallic campaign, Caesar brought the 10th legion from Spain (with the 7th, 8th and 9th legions). Almost immediately, in the summer of 58 BC the legion fought in two major actions, the Battles of Arar and Bibracte. They played a central part in Caesar's defeat of the Helvetii tribes, preventing their migration from present day Switzerland to western France.

Following the defeat of the Helvetii, the leaders of the Gallic Tribes petitioned Caesar for his aid against Ariovistus, king of the German Suebi tribe. Prior to battle, Ariovistus suggested a peace conference but insisted that each side should only be accompanied by mounted troops. Ariovistus made this a condition knowing that Caesar's cavalry was composed mainly of Aedian horsemen who's loyalty to Caesar was questionable. Caesar ordered a group of his Gallic auxiliaries to dismount and had legionaries from the 10th ride in their place to accompany him to the peace conference. This incident earned the legion its nickname Equestris (mounted). Legio X saved the day in the Battle against the Nervians in 57 BC. Together with the IXth, the Xth defeated the Atrebates, moved against the Belgians on the other side of the river and captured the enemy camp. From that position, the Tenth could see how desperate the situation was for the XII Victrix and the VII, so it quickly charged downhill, crossed the river, and attacked the Nervii from the rear, trapping them so that there was little hope of survival.

In 45 BC the legion was disbanded, and the veterans obtained lands in Narbonne, southern Gaul. During the civil war that followed Caesar's assassination, the Legio X was reconstituted by Lepidus (winter BC44/43), and fought until the final Battle of Philippi. The veterans obtained lands near Cremona, and an inscription reports that the name of the legion at the time was Veneria, "devoted to Venus", the mythical mother of gens Julia. The Tenth later followed Mark Antony in Armenia, during his Parthian campaign. During Antony's civil war, the legion fought for Mark Antony until the defeat in the Battle of Actium, after which the legion moved into Octavian's army. The veterans settled in Patras. When the legion rebelled under Augustus, it was disbanded, stripped of its Equestris title, and, being populated with soldiers from other legions, renamed X Gemina