This statuette depicts a mounted trooper of The Life Guards undertaking ceremonial duties outside the Horse Guards buildings in Whitehall. 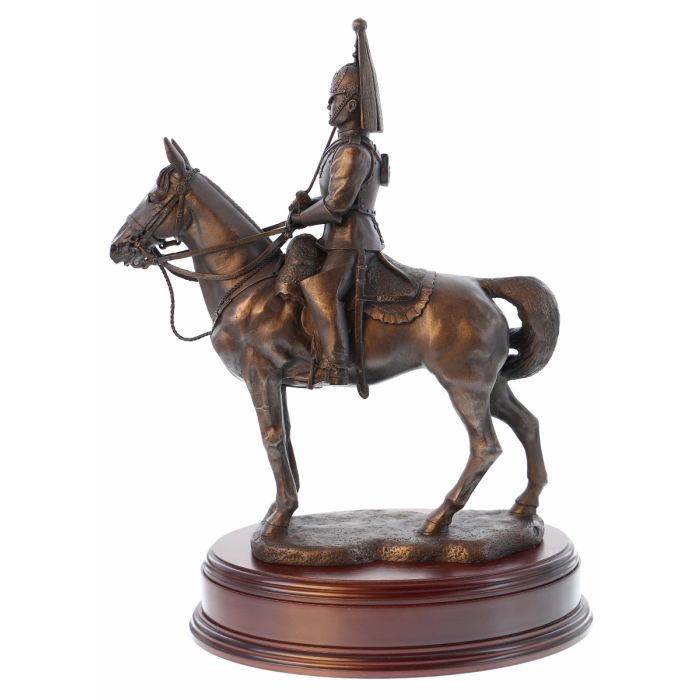 The Life Guards have provided bodyguards to the Sovereign for over 300 years. The Regiment is thus, the most senior, although not the oldest, in the British Army.

At the beginning of the Civil War the young Prince Charles (later to be crowned Charles II) was sent for safety to Holland together with a number of Royalist supporters. About 80 of these were organised into a group to guard the Royal residence and to escort Charles at all times; these became known as the Life Guards. By the time the Monarchy was restored (1660) after the death of Cromwell the number of these Life Guards was increased to 600 and were called The Horse Guards or The Life Guards of Horse. The duties of these Life Guards were to provide a guard for the royal palace at Whitehall and an escort for the King. These duries remain the principal functions of the mounted squadrons of the Household Cavalry of which The Life Guards form a part.

The Life Guards have a distinguished fighting record and have participated in most of the major battles and campaigns of the British Army.  Their first action was in Maastricht in Holland in 1673 and  they played a minor part in the defeat of the Duke of Monmouth’s army at Sedgemoor in 1685.  The Regiment was involved in wars in Europe,(the Austrian Succession, at Dettingen, Fontenoy, and later in the Napoleonic Wars); they played a leading role in the Battle of Waterloo in 1815.  In 1882 elements of the regiment took part in the famous ‘Moonlight Charge’ at Kassassin in Egypt.  The Life Guards fought in both World Wars, earning 28 Battle Honours in the Great War and 21 between 1939 and 1945.

The statuette depicts a mounted trooper of The Life Guards undertaking ceremonial duties outside the Horse Guards buildings in Whitehall.  His dress uniform is very distinctive and originated in the 17th Century: The steel curass worn by both The Life Guards and The Blues and Royals is now the only ceremonial body-armour still worn by any British soldier.  Their white metal helmet with brass ornamentation copies the ‘Prince Albert’ pattern (1842) and is completed with a white helmet plume made from horsehair.

The Life Guards were combined with the Blues and Royals in 1993 to form The Household Cavalry Mounted Regiment which is based in Windsor. As well as undertaking their ceremonial duties the Regiment provides light reconnaissance to the 5th Airborne Brigade.

Quick: Milanollo and Men of Harlech

Slow: The Life Guards Slow March and Men of Harlech