This is the Electroformed Silver vesion of our 8 inch tall statue depicting a Gurkha Soldier in World War 1. The sculpture is based on the Brigade of Gurkhas Memorial in London. 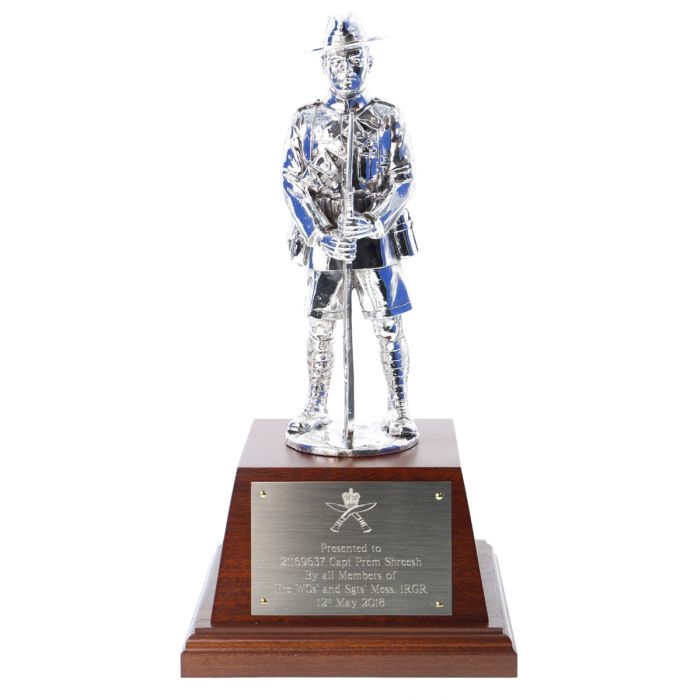 The Brigade of Gurkhas

(It is better to die than live a coward)

In 1814 a war broke out between the British and the Nepalese principality of Gorkha, which in early 1815, led to the defeat of the tough and warlike tribe. Out of mutual respect, a friendly convention was signed in 1815 allowing the British to recruit troops Gorkha. In April 1815 the Corps of Gurkhas, (a British mispronunciation) consisting of three battalions was formed up and added to the British Army’s ‘irregular’ strength.

Since then the sturdy Gurkha mountain men of Nepal, every one a volunteer, have served throughout the Empire and in two World Wars. In each World War over 120,000 young men heeded the call to arms and served across the world, a tradition that their sons, grandsons and descendants still follow to this day.

In 1914 at the outbreak of War the Gurkhas now consisting of ten regiments, each with two or more battalions of 1000 men were deployed across India, Pakistan and on the North West Frontier. By early 1915 with the war intensifying troops were urgently needed in Flanders, Gallipoli and Africa. There began a massive movement of troops, from all the nations of the British Empire and of course the re-deployment of the various regiments of Gurkhas into the most active theatres of war.

In France in 1915 Gurkhas were the first soldiers to break the German line at Neuve Chapelle and would prove particularly adept the very dangerous occupation of night patrolling to dominate ‘no man’s land’ between the lines. Their reputation went before them and armed with their dreaded fighting knives, called Kukri’s, which were particularly suited to trench warfare, they became feared warriors with almost mystical powers.

Gurkhas were deployed extensively in Gallipoli and the 1/6th were the only regiment to secure the commanding heights of Sari Bair above the landing beaches with the Turkish trenches taken with a final ‘kukri’ charge. The 2nd Regiment sent one Battalion to Mesopotamia, who after the Russian Revolution went as far North as the Caspian Sea to protect Persia. The 3rd mainly fought in France and at one time had a Battalion detached to serve with Lawrence of Arabia as mounted infantry on Camels. The 4th fought in the Dardanelles with the 5th who with an officer and 25 men were the last to evacuate the Gallipoli Peninsula.  The 6th Held the Suez Canal, saw action at Gallipoli, and went on to Mesopotamia and Greece via the Black Sea. The 7th Remained in India as a Garrison and Training regiment and saw action at Kut and Baghdad, whilst the 8th served in Palestine and France. The 9th and 10th also saw action in France, Suez and Gallipoli.

In 1948 the regiment in recognition of their outstanding service, were taken on the regular strength of the British Army and have continued to serve across the world seeing service in The Falklands, The Middle East, Borneo and recently spearheaded the NATO force into Kosovo in the Balkans.