A pair of 8" scale crouching Firefighters laying foam with a Branch. 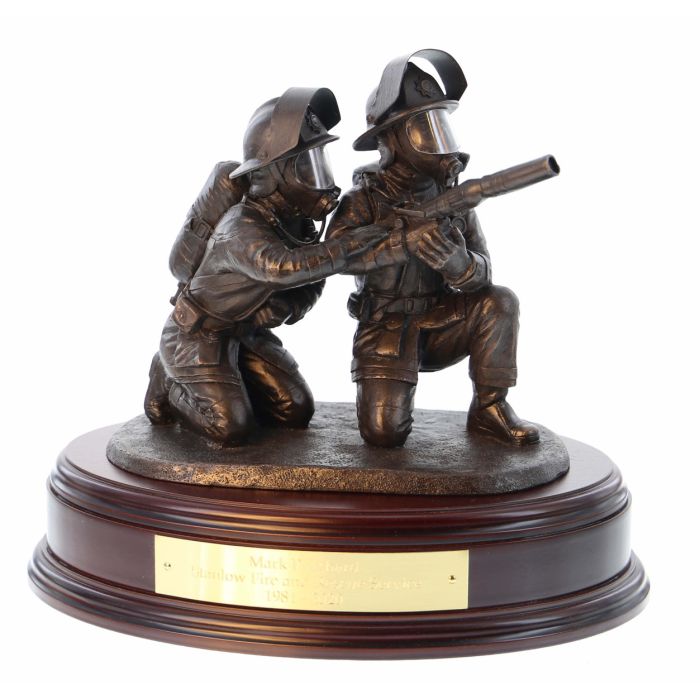 The Fire Service of today has become a relatively small, highly organised and trained force. The modern environment, particularly the massive use of oil -based products and concrete structures, has changed the nature of fires. In a normal modern fire there is more heat and smoke in the environment than ever in the past. To fight a fire effectively, front line crews have to get closer to the blaze, and stay in the vicinity longer than before and this is reflected in their techniques and dress.

Fire prevention and education is now a fundamental part of the role of the Fire Service and a significant part of the annual budget is spent on teaching the community how to minimise the risk of fires starting, and what to do if one occurs. The recognised goal of the modern force is the total elimination of accidental fire.

“The Branch” depicts a pair of fire-fighters directing a high pressure jet of water at the seat of a blaze. The front figure is primarily concerned with controlling the jet and checking the close frontal proximity for threats and possible stances. The rear fire-fighter maintains the link with the backup crew and is the pair’s, longer range, eyes and ears, assimilating their position and effectiveness.

The Fire-fighter’s dress and equipment is carefully designed to protect from, blast, heat, smoke and noise, but is light to wear, and allows for easy communication. The Helmet, although modern and made of Kevlar, is still a coxcomb shape, a tribute to Braidwood, providing strength and deflection from falling debris. Underneath is a collapsible pad and metal rim designed to withstand and absorb the massive force of a direct blow. The helmet’s visor, although being of use in deflecting heat, is primarily designed to protect the face and eyes from flying debris such as metal fragments while using cutting gear at a road traffic accident. The neck curtain, hanging down from the rear rim protects the neck and ears from the effects of flashover.

The Fire-fighter’s clothing has also radically changed and is now made of a triple layer of Nomex Delta material, heavily batted for heat and blast protection. Against the skin there is a soft wool-type layer to provide comfort and warmth on a wet, or cold, call out. The jacket is long and padded, hanging down to the wearers thighs, designed to protect the small of the back and elbows when crouched or crawling. The knees are equally protected and heavily stitched for durability whilst the bright reflective stripes stand out, making it easy to locate a fire-fighter in a dark, smoky environment.

To complete the package, the fire-fighter of today wears a highly sophisticated, positive pressure, breathing apparatus. The system once connected and switched on supplies the fire-fighter with pure, clean air pumped into the visor via a regulator. In normal conditions the air will last forty-five minutes, under exertion as little as twenty-two. In an emergency, with a Fire-fighter trapped, the breathing apparatus has a “buddy” tube which can be attached to a colleague’s system to providing life saving air.

Despite the all equipment and technology, the fire-fighter still has to use his, or her, initiative, courage, strength and dedication in their principal role, which remains, saving life and property from the immense and terrifying, tragedy of fire.