Duke of Wellington at Waterloo 1815

This is our Duke of Wellington statuette. He's mounted on Copenhagen during the Battle of Waterloo and it is made in the 8 inch scale, (overall height 14 inches). The presentation piece makes a lovely retirement or long service gift. we include the wooden base and the engraved brass plate as standard. 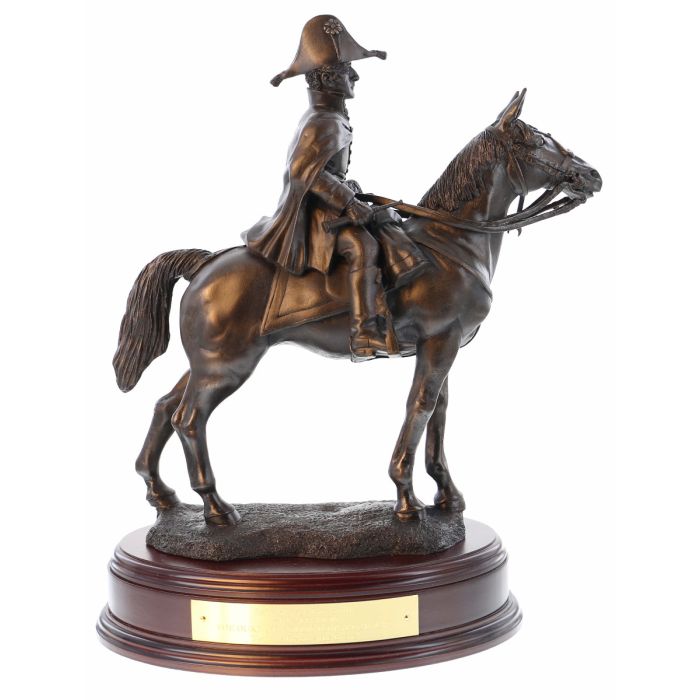 Duke of Wellington at Waterloo - In 1815, at Forty Seven years old, Wellington was a master on the battlefield, he had personally commanded at sixteen battles and eight seiges and had never been beaten. In defence he was particularly brilliant, a genius at taking a position and adopting a battle strategy to suit the terrain. His immediate commanders, many old Peninsular War campaigners intuitively understood Wellington's wishes and the British Infantry, battle tested and rigorously disciplined would stand and fight, tenaciously volleying fire from their lines or squares with devastating effect. It was well understood that no British Army of the era, particularly under command of Wellington, could be beaten by direct frontal attack.

By early evening the theory had been tested, the British and Allies although sorely tried, and greatly depleted in number had held. The Prussians under the command of Blucher himself had arrived and were turning the French right and rear, Wellington had one final decision to make, should he attack? After a ruminative bite at his riding crop and a glance at the setting sun he made the last major military decision of his life. With the remark "oh well, in for a penny" he lifted his hat and waved it over his head three times, the signal for a general advance. The British line, gallant to the last, moved off westwards across the battlefield to seize the French line by nightfall.