This is an 8" scale cold cast bronze resin statue of a Blues and Royals Trooper mounted on horse back and dressed in Winter Review Order. 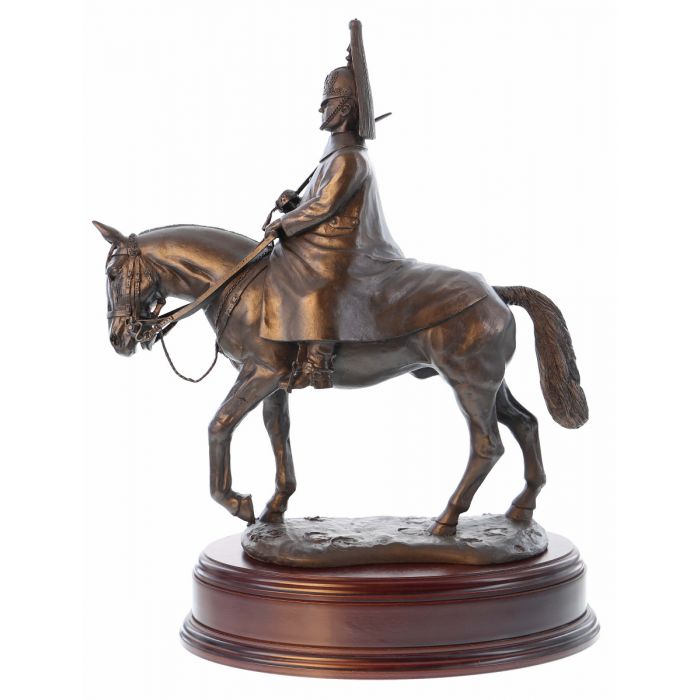 THE BLUES AND ROYALS

In 1969 The Royal Horse Guards (The Blues) were amalgamated with the Royal Dragoons (1st Dragoons) to form a new Regiment in the Household Cavalry, called “The Blues and Royals”.

The Royal Horse Guards were directly descended from the Regiment of Horse raised by Oliver Cromwell in 1650 to fight with the Parliamentary Army in the Civil War. After the Restoration of the Monarchy in 1660, King Charles II took over the Regiment and under the command of the Earl of Oxford (Aubrey de Vere) it was renamed the “Royal Regiment of Horse”.  In time this Regiment became associated with the Earl’s livery, Oxford Blue and after about 1690 it was nicknamed “The Oxford Blues”. In 1750 this nickname was incorporated into the offical name of the Regiment which became “The Royal Horse Guards Blue”.  In 1819 their title was again changed to “Royal Horse Guards (The Blues) and in 1820, as a compliment to their Colonel, The Duke of Wellington, and to acknowledge their courageous and distinguished service at the Battle of Waterloo in 1815, “The Blues” were granted the full status of “The Household Cavalry”.

Dragoons were mounted infantrymen, equipped with muskets, who could ride into battle, dismount and fight on foot.  Their use offered field commanders the opportunity to combine mobility and firepower into a battle winning combination.  The soldiers of the Dragoons were considered elite as they had to combine personal initiative, courage and a variety of skills to be effective. These were the kind of fighting men who made up the Dragoon Regiments.

The Royal Dragoons (1st Dragoons) were, until their amalgamation with the Blues, the oldest Cavalry Regiment with its own connections.  Raised in 1661 as “The Tangier Horse”, the 1st Dragoons spent 20 years fighting the Moors in Spain. Thereafter they took part in the Wars of the Spanish and Austrian Succession (1740-48), The Seven Years War (1756-63), and the Peninsular Campaign against Napoleon (1808-14). In 1854 the 1st Dragoons took part in the famous Charge of the Heavy Brigade at Balaclava and later fought in Egypt and South Africa (1899-1902).  During the First World War they served as infantrymen and in the trenches in France; between the Wars the Regiment, like most mounted units, were equipped with tanks and it was as mechanised troops they fought in the Second World War in North Africa, Italy and North-West Europe.

The Blues and Royals and The Life Guards have now combined to form the Household Cavalry Regiment based at Windsor in the south of England. As well as undertaking their ceremonial duties, the Regiment provides light reconnaissance support for the 5th Airborne Brigade. In 1982 two troops of the Blues and Royals fought with distinction in the Falkland Islands.

The statuette depicts a mounted trooper of The Blues and Royals undertaking ceremonial duties London. The steel curass worn by both The Life Guards and The Blues and Royals is now the only ceremonial body-armour still worn by any British soldier. Their white metal helmet with brass ornamentation copies the ‘Prince Albert’ pattern (1842) and is completed with a red helmet plume made from horsehair.

The Blues and Royals were combined with the Life Guards in 1993 to form The Household Cavalry Mounted Regiment which is based in Windsor. As well as undertaking their ceremonial duties the Regiment continues to provide light reconnaissance support to 5 Airborne Brigade.

Quick: Regimental Quick March of the Blues and Royals

Slow: Slow March of the Blues and Royals