This is a complicated three piece sculpture of two soldiers of the Black Watch Scottish Highland Regiment protecting and comforting a dying comrade during the bitter winter months in the Crimea 1854. 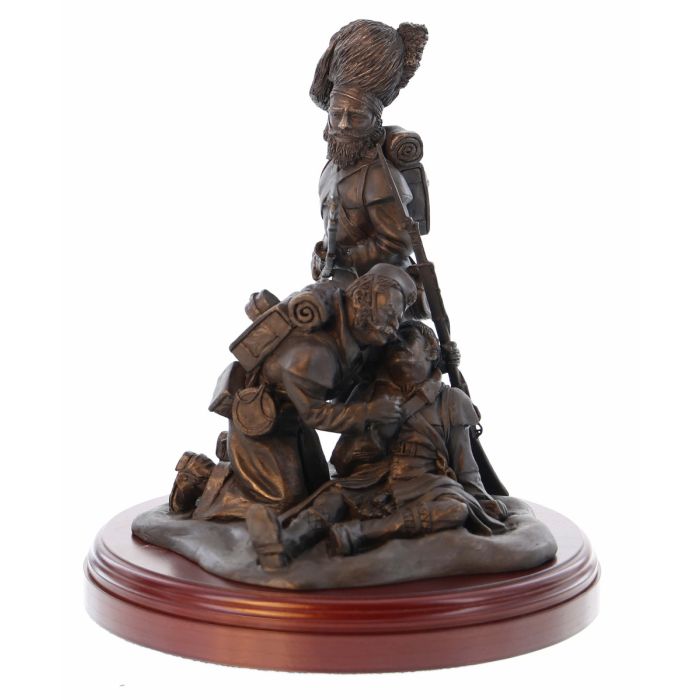 The Black Watch (42nd Foot) was despatched, as part of the British Expeditionary Force, from Portsmouth to the Crimean Peninsular on the northern side of the Black Sea in May 1854.  On arrival at Scutari, in Turkey, on the 9th June the regiment was “Brigaded” with the 79th ‘Cameron’ Highlanders and 93rd ‘Sutherland’ Highlanders as ‘The Highland Brigade’, under command of Sir Colin Campbell a redoubtable fighter who had started his career as a private soldier.

At Scutari the force was given the task of sacking Sevastopol as its objective and after some reorganisation departed for the Crimean Penninsula. On the 14th of September the force having survived terrible conditions crossing the Black Sea arrived at Calamita bay sixty miles to the North of Sevastopol where unloading took place.  Once landing had been completed, the infantry were formed into column and with bands or pipers playing, marched off  towards their objective, the fortress and dockyards on the southern side of Sevastopol Bay.

After six days march the British force met an army of about 3,000 Russians who had taken up a strong defensive position, on high ground beyong the River Alma. The British commenced a direct attack up the steep slope guarding the enemy front. The Highland Brigade took post on the British left and advanced in echelon with the 42nd leading. Under heavy fire, the 800 Highlanders advanced steadily upwards, a line of dark tartan, red coats and feathered bonnets. As they crested the rise with bayonets glinting, Regimental Colours unfurled, and pipers playing, the Russians fled, leaving the way clear to march on Sevastopol and the port of Balaclava.

During the winter of 1854, and until Sevastopol fell on the 9th September 1855, the 42nd undertook arduous siege and picket duties, forming part of the reserve for the assault on that part of the fortifications known as the ‘Redan’. The sculpture depicts a period of duty in the winter months of 1855 when the highlanders of the Black Watch suffered great hardship from disease, neglect and inclement weather. In these trying conditions the men had little to sustain them and turned to each other for support. Strong bonds of  regimental comradeship were forged which are fundamental to the spirit of the regiment. This comradeship has stood the test of time, through the many generations, wars and campaigns, the Black Watch have fought with honour, compassion and pride. Today’s soldiers are justly proud of their lineage and the sentiments expressed this sculpture are as true today as they were in 1855.