The renowned Scottish sculptor Alan Beattie Herriot DA, ARBS made the original statue of Bamse, and this miniature (8" Tall by 7" Long) version. 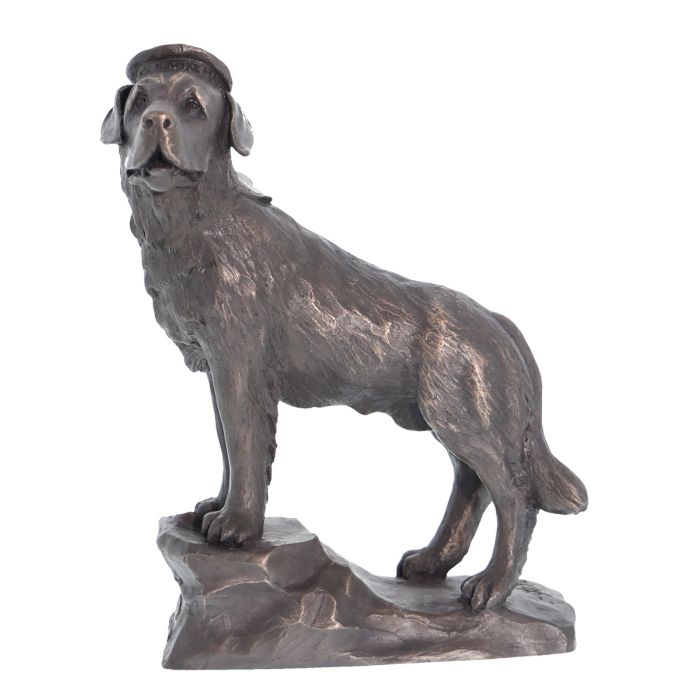 We manufacture 'Bamse' for the Montrose Heritage Trust and sell them with a sizable cotribution going to the charity. We therefore cannot include 'Bamse' within any of our sales.

Bamse (‘Teddy Bear’) started his life as the pet and guardian of the four children of the Hafto family in Honningsvåg, at the North Cape of Norway. At the onset of the war he went to sea with his master, Captain Erling Hafto, and on 9th February 1940 he was enrolled as an official member of the crew of the minesweeper KNM Thorodd. Issued with his own steel helmet, Bamse took up action stations at the forward gun turret, facing the enemy, acquiring a reputation for courage that elevated him from being a ship’s mascot to being the mascot of the Royal Norwegian Navy. In 1944 he became an official PDSA Allied Forces Mascot, ‘the Largest Dog in the Allied Forces’.

After the fall of Norway to the Germans in June 1940 the Thorodd escaped to East Scotland to continue the fight, spending the rest of the war operating from Montrose and Dundee. Bamse was a very effective ship’s sentry, and acted as guardian of the crew. He patrolled the pubs and clubs to find the sailors (sometimes even taking a bus) and shepherded them back to the ship. His remarkable skills saved the life of an officer who was the victim of a knife attack at Dundee docks, and to rescue a sailor who had fallen overboard. For these extraordinary deeds Bamse was posthumously awarded the Norges Hundeorden (1984) and the PDSA Gold Medal, the equivalent of the George Cross, (2006).

Loved by the sailors, Bamse became endeared to the local people of Montrose and Dundee. Amongst many escapades he joined in football matches, accompanied sailors and their girlfriends on dates, and enjoyed a musical evening in the pub with a pint or two of beer. When he died on 22nd July 1944, such was the sense of loss that hundreds of sailors, civilians and children attended his burial at Montrose.

Scots and Norwegians have never forgotten the legend of Bamse, now recorded in the book Sea Dog Bamse, and commemorated with his own Scottish tartan. On 17th October 2006 HRH Prince Andrew unveiled a bronze statue of Bamse on the waterfront at Montrose, and on 22nd June 2009 a matching statue was unveiled on the waterfront at Honningsvåg. see: www.bamsemontrose.co.uk

The renowned Scottish sculptor Alan Beattie Herriot DA, ARBS made the original statue of Bamse, and this miniature (8" Tall by 7" Long) version. It is to be issued in a numbered edition, certified by the signatory.