With a total height of 14 inches, this is a display statuette of an American Indian Medicine Man, "The Shaman". We offer a choice of wooden base, style of finish and of course free engraving on some of the base options. 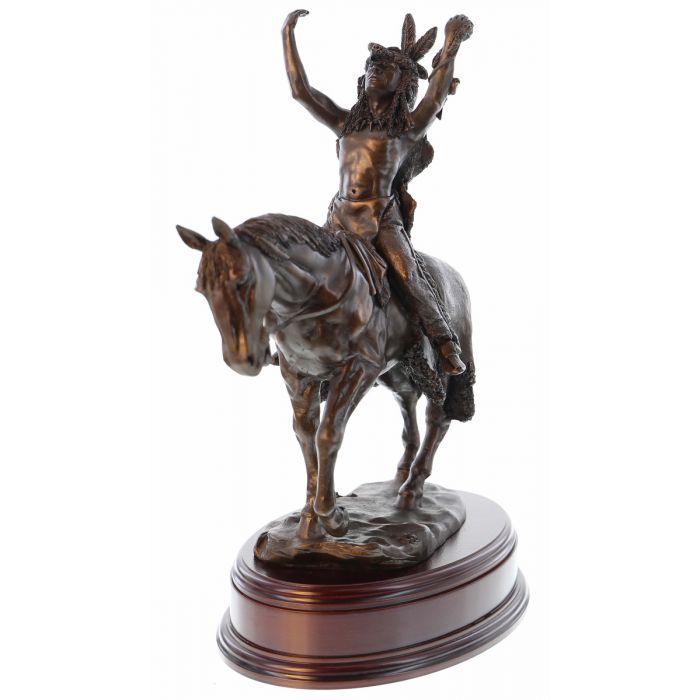 Since their arrival in small bands from Siberia at a time when the Bering Sea was a land bridge, the Indians with their dogs had been hunter/gatherers covering vast distances on foot each year to trap and kill animals with their flint tipped spears and arrows. Life was dangerous, precarious and short. Each group, which probably numbered no more than a few hundred people, seldom met up with other human beings and, when they did, contact was usually brief and unproductive, as they could not communicate with each other. Over 300 groups has as many languages and it was not until the 18th Century after settlers began to arrive from Europe that contact in French or English made communication among tribes possible. In these isolated societies spiritual beliefs were few and simple. All the peoples believed in some kind of ‘Man Above’ and that the problems which beset them, be they individual or as a group had a cause which they could affect. The intermediary with these spirits was the Shaman, or Medicine Man who could interpret problems and intercede with the Gods. He was greatly revered and feared by all, as it was believed that the future hopes and prosperity of the group lay in his hands. Apart from being able to deal with personal human problems he was called upon to explain or advise on natural crises which affected the group, (lack of rain, shortage of game, disease, puberty, anti-social behaviour) and to carry out the necessary measures to counteract the evil forces causing these crises.

The position of the shaman to a group was usually hereditary; it passed from father to son. He communicated with the spirit world at will or through ecstasy which could take two forms; in the first case the body of the Shaman was taken over by a spirit or the second in which he could command his spirit to wander through the realm of the spirits. His group, particularly the elders, depended on him to advise them on a wide range of matters. He was to foresee the future, discover the place of a lost animal, forecast the prospects for fishing and hunting, and of course was wise in the ways of physical healing and disease.

In matters of very great importance the Shaman would go alone, for some days to rejuvenate and seek the spirit world. ‘Spring Dawn’ depicts one of these moments, the coming of spring. At this time the Shaman would welcome the arrival of the sun and the warmth it would bring, giving new life to the plants and creatures in his world. He would seek strength and guidance for the coming months and of course give thanks that his tribe had survived the cold, bleak winter.