With a total height of 13 inches, this is a display statuette of an American Cowboy, "The Cattle Drive". We offer a choice of wooden base, style of finish and of course free engraving on some of the base options. 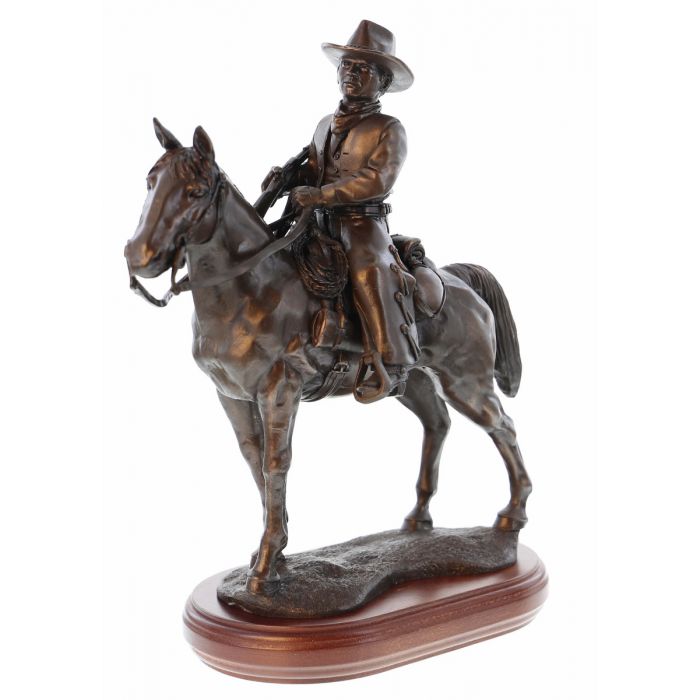 ‘....Tie my bones to his back, turn our faces to the West

And we’ll ride the prairie that we love the best’

A cowboy without his horse was like a fish without water and although he was able to ride any horse, and on the drove there would be at least ten horses for each rider, each man had his ‘special horse’ and these are the ones immortalised in songs like ‘Old Faithful, ‘Old Paint’, ‘The Wheel of the Wagon’ and many more.

The golden age of the cowboy  was the 25 years which followed the end of the Civil War  in 1865 as a combination of conditions made cattle rearing and ranching a highly profitable enterprise, many using easily available foreign capital to purchase land and livestock. The native buffalo, which around 1800 was estimated to number at least 50 million, has all but been exterminated through a combination of the horse, the commercial hunters and the repeating rifles; by the 1860ties there was a huge market for salted buffalo tongues (the only part used from the huge shaggy creatures) although traditionally the buffalo provided all the needs for food and clothing of a large indigenous Indian population. By 1870 the once proud Indian population had been reduced to a little over a million, mainly by disease - it once numbered about 10 million. The steady advance of the railways was linking the plains with the industrial centres in the east and the west where the demand for fresh meat was growing rapidly. So the Texas Longhorns and the white-faced Herefords were moved into ideal conditions of grazing completely free from human and natural competitors or predators and with them came their guardians, the cowboys, who controlled their peaceful annual cycle of grazing, breeding, branding and culling. What kind of men were they?

Normally less than 40 years old the typical cowboy came from a rustic farming background which had inured him to discomfort and boredom. Few were tall, hey probably averaged about 5’4”, they were mainly illiterate and whiled away their time yarning or singing; they could happily sit or ride for hours without saying anything. Few could afford the leather leggings, (tapaderos) and foot protectors, (chaps) which protected the legs of the riders from thorns, and the multi-purpose bandana, (The long head scarf) replaced the high ten-gallon hat beloved by the movie makers. Bu every cowboy would have three possessions for which he was personally responsible - his bedroll, his revolver and his special horse.

Cowboys were a silent breed and on the trail communication was mainly by hand signals and although life was normally eventless the cowboy had always to remain alert to human interference from  gangs of rustlers out to steal a few poorly guarded cattle, and parties of Indian braves on the lookout for some horses. There was also natural threats, the sudden rearing rattlesnake, or the peal of thunder, crack of lightening, rumble of loose stones or even a breaking stick which could transform a docile herd of cows and calves into a stampeding torrent of crazed animals charging heedlessly across the prairie. In any of these circumstances the cowboy was expected to use his skill and bravery to restore the situation to normality even if it meant risking his life. It was situations like these which held the listeners at the evening campfire spellbound and which, of course, improved with the telling.

Sentimental, worshipping the memories of mothers and idolising women, the soft-spoken, shy, awkward cowboy was often the cause of cruel laughter or the butt of many a joke as he waddled stiffly across the road. But once on his horse he was transformed into a figure of power, respect and over the years he has become one of the formative figures which has created the American nation.