Mounted trooper of 16th The Queen's Lancers charging at the Battle of Aliwal, Northern India in 1846. 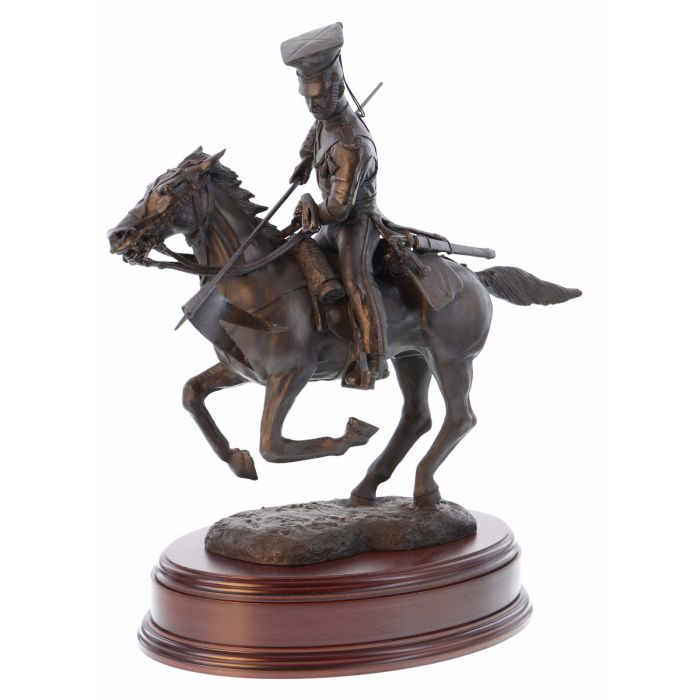 In December 1845, units of the British Army were deployed to fight the Sikh Army in North West India. The Sikh’s under the command of Ranjut Singh, had crossed the River Sutlej, an action that was seen as act of war against the British. During the month two battles were fought at Moodkee and Ferozeshah where the British, strained to breaking point, held against the Sikh’s. On the 10th of January a new Sikh army thought to be about 10,000 men  bridged the river and occupied the Loodiana District where they began erecting defensive positions.

Sir Harry Smith, one of Sir High Gough’s Brigade Commanders was despatched to Loodiana with his Brigade. His orders were to use his judgement with the general aim of containing the enemy whilst more troops and artillery were rushed to the area from Dehli. The next day, Gough received reports that the Sikh’s were much stronger than anticipated and further troops including the16th Lancers, were sent chasing after Smith. It took the reinforcements two forced marches to catch Smith who by then was closing on the District. Smith’s force now strengthened, marched on the provincial capital Loodiana. As they approached the town, which they found to be in enemy hands,  the force came under attack from the rear and lost a great deal of baggage. On arrival an immediate attack was mounted and by sunset on the 21st the town’s fort was in British hands. Smith then determined to march on Buddiwal which he took on the 27th. On occupation, he was informed of a large Sikh camp containing some 40,000 troops and artillery between the village of Aliwal and the River Sutlej. He immediately gave orders for a full scale attack on the 28th.

At sunrise the troops began marching the eight miles to Aliwal. A mile short of the village the British halted to deploy. In front of them was a large broad plain with the village and river beyond. The 16th, as part of the 1st Cavalry Brigade were on the British left flank facing the Sikh right. Smith’s plan of atack was to send his cavary forward to ‘break up’ the Sikh formations allowing his Infantry time to close and destroy those that remained.  The attack commenced on the left with a frontal cavalry attack by the 1st and 4th Cavalry Brigades who swept into the village of Aliwal. On the far side of the settlement the 16th Lancers ran into a large formation of Sikh cavalry. On the left, 4th Squadron, 16th Lancers, led by Captain Bere immediately charged the densely packed enemy, breaking them up and forcing them out of action. The charge over, Bere swung his squadron round to attack Sikh Infantry who were now rapidly forming squares. His troops cut through, reforming with Captain Fyler’s squadron who had just broken another infantry square. The remainder of the regiment, the right flank, under command of Major Smyth had been under considerable artillery fire from their front. At last with the other Squadrons secure, Smyth gave the order to charge. The Lancers swept forward in immaculate order, to clash with masses of Sikh Infantry and Gunners counter-charging from their gun-line. The Sikh force overwhelmed the two squadrons of cavalry and a vicious close quarter battle raged. In the meantime, under cover of the Cavalry, the British Infantry had closed, capturing Aliwal to pour fire into the Sutlej riverbed where the Sikh army had begun to flee.

By now the 16th were no longer in action, their charges had cost them dear, two officers and fifty-six rank and file were killed along with eighty three wounded. Major Smyth himself received a severe bayonet wound to the waist and for a time seemed likely to die. However by good fortune, the blade, smothered in cut uniform and sword belt, missed his bowel thus saving his life. The Gallant Major who insisted on not receiving any treatment until the last of his soldiers had been cared for, was off the sick list and back in the saddle within six weeks.